Penelope Fitzgerald is one of those authors I’ve been aware of for many years, but had never got around to reading. Three of her novels, The Bookshop, The Beginning of Spring and The Gate of Angels have been shortlisted for the Booker Prize, and she won the prize in 1979 with Offshore. I knew she was held in high regard, but somehow, she’d fallen off my radar. But then at the end of last year, 4th Estate reissued Fitzgerald’s books in beautiful new editions. Tempted by these reissues in their smart covers, I thought I’d try one of her novels: The Beginning of Spring, first published in 1988.

The Beginning of Spring is set in Moscow in the winter of 1913, a time political and industrial change for Russia. Frank Reid — born and raised in Russia, but English by descent – owns and manages a small printing works, part of a business established by his father. As the book opens, Frank learns that his wife, Nellie, has left him suddenly and without any warning. Nellie has taken their three children (Dolly, Ben and Annushka) with her, but subsequently deposits them at Mozhaisk station. Frank is at a loss as to why Nellie has disappeared so abruptly, abandoning the children during her escape. On the children’s arrival home, Dolly (at ten, the eldest of the three) offers her father the following observation, which makes her seem wise beyond her years:

‘You shouldn’t have expected her to manage by herself. She had to send us back, we weren’t a comfort to her. I think you asked too much of her.’ (pg. 23, 4th Estate)

And a few days later, Dolly tells Frank ‘the mistake she probably made was getting married in the first place.’ (pg. 62)

During the novel, we learn a little more of Nellie’s upbringing in Norbury, and how she came to meet Frank through the local choral society. As a young man, Frank journeyed to England to study and gain hands-on experience of the printing industry, and his training took him to Norbury. Fitzgerald takes us back in time to illustrate Frank’s initial impressions of his future wife:

Frank was struck by her way of looking at things. There was a tartness about it, a sharp flavour, not of ill-nature, but of disapproval of life’s compromises, including her own. (pg. 29)

Nellie is determined that she’s ‘not going to be got the better of by Norbury’. We sense her desperation to get away from this stifling environment, the gossip and judgement of its inhabitants, not to mention the scrutiny of aunts, uncles and other family members due to attend the wedding. A little before her wedding day, Nellie seems unsettled by her lack of experience with men, and the same anxieties return to her mind:

It was a moment’s loss of confidence, which Frank knew he mustn’t allow. Under his hands her solid partly naked body was damp with effort. She was recklessly dragging off something whose fastenings seem to defy her. Her voice was muffled. ‘Go on Frank. I’m not going to let them stand about knowing more than I do. I won’t be got the better of.’ (pg. 37)

There’s something quite telling about this section of the narrative, and yet Fitzgerald leaves much unsaid, thereby allowing the reader to contemplate the significance on future events. As the flashbacks continue, Nellie seems quite at home in Moscow on their arrival in Russia, more so than in Germany where the couple spent their first three years of marriage. And so we still don’t know why Nellie has left Frank, or whether she intends to come back.

Returning now to 1913, Frank sets about trying to make arrangements for the care of the children. Keen to avoid the English chaplaincy (the chaplain’s wife is quite a character) for as long as possible, Frank draws on the support of Arkady Kuriatin’s wife and family; Kuriatin is a merchant and business contact, and his family are happy to accommodate the Reid children, in the short term at least. Fitzgerald’s writing contains flashes of sly humour, and we see this in her description of the Kuriatins:

Arkady had children – how many, Frank couldn’t say, because extra ones, perhaps nephews and nieces, perhaps waifs, or even hostages, seemed to come and go. His wife, Matryona Osipovna, was always at home. Frank had heard her say, ‘What is there better outside than in?’ Nellie had always admitted Mrs Kuriatin’s kindness, but couldn’t be doing with her. (pg. 63)

A visit to Moscow by Nellie’s rather naïve brother, Charlie, also provides ample opportunity for Fitzgerald to add touches of wry humour to the narrative.

Another of the novel’s delights stems from its cast of finely-drawn and memorable characters; one such character is Selwyn Crane, Frank’s chief accountant, fervent poet and avid follower of Tolstoy. In order to provide his employer with a solution to his childcare dilemma, Selwyn introduces Frank to Lisa Ivanovna, a bright young peasant girl who can speak good Russian to the children. The author gives us a few details of how Selwyn has encountered Lisa. Finding her in tears while working in a Moscow department store, he assumes she’s feeling homesick and out-of-place in the big city. And yet, there is an air of mystery around Selwyn’s connection with the girl and his reasons for bringing her to the attention of Frank. All goes well when Lisa meets Frank’s children (who seem to be showing few signs of missing their mother), and so the young girl moves into the Reid household. Frank finds himself drawn to this attractive, quietly enigmatic creature, but it would be unfair of me to say any more about how the remainder of the story unfolds…

The Beginning of Spring is a quietly compelling novel, one that draws you slowly, yet steadily, into its mysterious world. Fitzgerald gives us a skilfully realised picture of Russia in this era with its tea rooms bustling with activity and its well-to-do houses. We see how business and dealings with the authorities are conducted in Russia during this period, a time when one had to have ‘an instinct for how much in the way of bribes would be appropriate for the uniformed and political police.’ And despite being born and raised in Russia, Frank is constantly reminded that he’s a ‘foreigner’, one whose freedom to come and go from the country is dependent on the disposition of the authorities.

As I’ve already hinted, there is much going on under the surface of the narrative, plenty left unsaid and this leaves space for the reader to ponder the significance of particular phrases and scenes. Towards the end of the book, there’s a beautiful extended passage covering the change and evolution of birch trees as the seasons pass from spring through to winter and back to spring once again. Fitzgerald describes in two or three pages the lifecycle of the birch, as we follow the trees from birth to decay and death. Once again, I’m sure this piece is symbolic of other events in the novel, but nothing is explicit; we’re left to draw our own meaning from these images. Similarly, could it be that the opening of sealed windows in the Reid household, an event that heralds the start of spring, is symbolic of something else? Could it be a metaphor for the release of repressed emotions, perhaps? A sign of feelings that have been bottled-up for months…

In the closing chapters, Fitzgerald deftly pulls the novel’s threads together, and we discover something of the puzzle surrounding Nellie’s disappearance. It’s a great ending, one that left me keen to read more of her novels at some point.

The Beginning of Spring is published in the UK by 4th Estate. Source: personal copy.

24 thoughts on “The Beginning of Spring by Penelope Fitzgerald (review)” 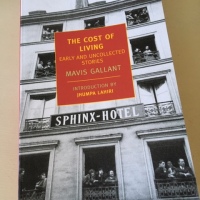