Taking advantage of the extension of Spanish Lit Month into August, I turned to Bartleby & Co., a clever and engaging piece of metafiction from esteemed Spanish author Enrique Vila-Matas. First published in Spanish in 2000, with an English translation following in 2004, Bartleby & Co. is a celebration of ‘the writers of the No’. Or, to put it another way, those authors who succumb to Bartleby’s syndrome by entering an extended, often permanent, period of literary silence. The name of this condition references Bartleby, the clerk in Herman Melville’s novella, Bartleby, the Scrivener, who when asked to do something or to reveal anything about himself, responds by saying “I would prefer not to.” 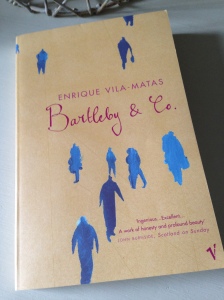 Bartleby & Co. is narrated by Marcelo, a solitary office worker and stalled writer who is struggling to write a follow-up to his first book published some twenty-five years earlier, a novel on the impossibility of love. (The narrator appears to be a thinly-veiled version of Vila-Matas himself. In his 2003 novel, Never Any End to Paris, the author refers to his quest to complete one of his first books, The Lettered Assassin, a story featuring a novel that will kill the reader seconds after he or she finishes reading it.)

Pretending to be suffering from depression, Marcelo, the narrator of Bartleby & Co, takes extended sick leave with the intention of working his way through ‘the labyrinth of the No’. By doing so, Marcelo believes he can find a way forward by opening up a path to authentic literary creation.

Only from the negative impulse, from the labyrinth of the No, can the writing of the future appear. (pg. 3)

Marcelo sets about compiling a set of footnotes to a text that does not exist. Each footnote contains details about one of many literary Bartlebys, their reasons for silence and snippets about their lives. Here’s an excerpt from the footnote on Mexican writer, Juan Ruflo; when asked why he no longer wrote, Ruflo would say:

“Well, my Uncle Celerino died and it was he who told me the stories.”

His Uncle Celerino was no fabrication. He existed in real life. He was a drunk who made a living confirming children. Ruflo frequently accompanied him and listened to the fabricated stories he related about his life, most of which were invented. The stories of El llano en llamas almost had the title Los cuentos del tío Celerino (Tales of Uncle Celerino). Ruflo stopped writing shortly before his uncle’s death. The excuse of his Uncle Celerino is one of the most original I know among all those concocted by the writers of the No to justify their abandonment of literature. (pg. 7)

The footnotes present a wide variety of reasons for not writing. These range from the commonplace and understandable (illness; writer’s block; drug addiction) to the downright bizarre – one writer remains convinced that José Saramago has stolen all his ideas by way of some strange telepathic powers.

Lack of inspiration is a familiar reason for not writing anything, even the great French writer Stendhal experienced it as he notes in his autobiography:

“Had I mentioned to someone around 1795 that I planned to write, anyone with any sense would have told me to write for two hours every day, with or without inspiration. Their advice would have enabled me to benefit from the ten years of my life I totally wasted waiting for inspiration.” (pg. 31)

Thinking about Stendhal’s situation reminds the narrator of another case, that of the ‘strange and disturbing’ poet, Pedro Garfias, friend of the Spanish filmmaker Luis Buñuel. Here was a man who spent many months not writing a single line simply because he couldn’t find the right adjective. Whenever Buñuel met the poet, he would ask him:

“Have you found that adjective yet?”

“No, I’m still searching,” Pedro Garfias would reply before moving off pensively. (pg 32)

There are references to several famous writers through the ages: Guy de Maupassant, Rimbaud, Andre Gidé, Robert Walser, John Keats, and Julien Gracq, to name but a few. Other cultural figures also feature: Marcel Duchamp, the great artist who shunned painting for over fifty years because he chose to play chess instead; and Michelangelo Antonioni, who wanted to make a film, L’Eclisse (The Eclipse) about a couple’s feelings drying up, in effect they become eclipsed as their relationship dissolves.

In presenting these literary vignettes, Vila-Matas adopts an ironic tone. There is a dry, self-deprecating humour running through Bartleby & Co., a tone not unlike the one he uses in Never Any End to Paris. Perhaps the best example of this wit is encapsulated in the footnote on the notoriously reclusive author J.D Salinger, a hilarious anecdote in which the narrator is convinced he has spotted Salinger on a New York bus. It’s too long to cover here, but its inclusion alone makes Bartleby & Co. worth reading.

Overcome by the plethora of literary eclipses he has discovered, Marcelo takes a moment to reflect on the tension between yes and no, to focus the mind on a reason to write. He ends up seeking solace in the first thing that comes to mind, a snippet from the Argentinian writer, Fogwill:

“I write so as not to be written. For many years I was written in my life. I acted out a story. I suppose I write in order to write others, to operate on the imagination, the revelation, the knowledge of others. Possibly on the literary behaviour of others.” (pg. 98)

By assembling this series of footnotes on writers of the No, there is a sense that Marcelo (a stalled author himself) is holding on to Fogwill’s words. In effect, the narrator is commenting on the literary silences of others ‘so as to be able to write and not be written’.

And does Marcelo achieve his aim of finding the centre of this labyrinth of the No, the source of all the negative impulses that prompt so many talented writers to abandon literature? I’ll leave you to discover that for yourself should you decide to read this book. Either way, by collecting these vignettes, the author has in fact written his next novel, one that is fresh, inventive and very enjoyable indeed.

I’ll finish with one final example, that of the esteemed Catalan poet J.V. Foix, whom Marcelo used to see standing behind the counter of his patisserie in Barcelona. A long-time admirer of Foix’s lyrical poetry, the narrator is curious to learn what prompted the poet to declare that his work was finished. It saddens him to think that Foix may have decided to wait for death. The answer comes by way of an article by the Spanish poet and novelist, Pere Gimferrer – writing on the cessation of Foix’s work, Gimferrer comments:

“But the same glint sparkles in his eyes, more serenely; a visionary glow, now secret in its hidden lava […] In the distance is heard the dull murmur of oceans and abysses: Foix continues to dream poems at night, even though he does not write them down.”

Poetry unwritten, but lived in the mind: a beautiful ending for someone who ceases to write. (pg 110)

For other reviews of Bartleby & Co, click here for posts by Richard and Seamus.