As in previous years, Meytal at the Biblibio blog will be hosting Women in Translation (#WITMonth) throughout the month of August. It’s a celebration of translated literature by women writers – you can find out more about it here. I’ve reviewed quite a few books in this category over the years; so, if you’re looking for some ideas on what to read next month, here are a few of my favourites. 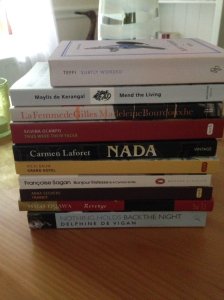 A quintessential summer read, Bonjour Tristesse is an irresistible story of love, frivolity and the games a young girl plays with others people’s emotions, all set against the blistering heat of the French Riviera. Seventeen-year-old Cécile is spending the summer on the Cote d’Azur with her father, Raymond, and his latest lover, Elsa. Everything is leisurely and glorious until another player arrives on the scene, the glamorous and sophisticated Anne, whose very presence threatens to disrupt Cécile’s idyllic life with her father. An utterly compelling novel – I’ll be reading Sagan again this year, this time in an Irene Ash translation.

This engaging novel revolves around the experiences of six central characters as they brush up against one another during their time at a Berlin hotel in the 1920s. There are moments of lightness and significant darkness here as Baum weaves her story together, moving from one player to another with consummate ease – her sense of characterisation is very strong. At the centre of the novel is the idea that our lives can change direction in surprising ways as a result of our interactions with others. We see fragments of the lives of these individuals as they come and go from the hotel. Some are on their way up and are altered for the better; others are on their way down and emerge much diminished. All in all, this is a delightfully entertaining read.

Carmen Laforet was just twenty-three when her debut novel, Nada, was published. It’s an excellent book, dark and twisted with a distinctive first-person narrative. Here we see the portrayal of a family bruised by bitterness and suspicion, struggling to survive in the aftermath of the Spanish Civil War. This is a wonderfully evocative novel, a mood-piece that captures the passion and intensity of its time and setting. Truly deserving of its status as a Spanish classic.

A novel inspired by Seghers’ own experience as a refugee fleeing from Europe following the German invasion of France in 1940, Transit gives an insight into the bureaucratic maze and red tape involved in securing a safe passage from Marseille. It’s a haunting and unforgettable story with questions of shifting identity and destiny at its heart. This was a standout read for me.

By turns satirical, insightful, artful and poignant, this is a fascinating collection of short stories and sketches, notable for the sheer variety in tone. What makes these stories particularly intriguing is their connection to various aspects of Teffi’s own life and experience, from her time in Russia prior the Revolution to the years she spent as an émigré in Paris. Her first-hand account of Rasputin – a highly perceptive piece – is worth the entry price alone.

When Elisa realises her husband, Gilles, has become entangled with Victorine, her attractive younger sister, she is devastated. Beautifully written in a sensual, intimate style, this is a very compelling novel with a powerful ending. The writing is spare but very emotive – Bourdouxhe holds the reader close to Elisa’s point of view giving us near-complete access to her inner thoughts and feelings. Highly recommended, particularly for fans of writers like Simenon and Jean Rhys.

Thus Were Their Faces by Silvina Ocampo (tr. Daniel Balderston)

I love the pieces in this volume of forty-two stories, drawn from a lifetime of Ocampo’s writing — the way they often start in the realms of normality and then tip into darker, slightly surreal territory as they progress. Several of them point to a devilish sense of magic in the everyday, the sense of strangeness that lies hidden in the seemingly ordinary. Published by NYRB Classics, this is an unusual, poetic collection of vignettes, many of which blur the margins between reality and the imagined world. Best approached as a volume to dip into, whenever if you’re in the mood for something beguiling and different.

More short fiction, this time from Japan, Revenge comprises eleven interlinked short stories, elegantly connected via a set of recurring images and motifs threaded through the individual narratives. Characters flow from one story to the next; we revisit specific locations and scenes from earlier tales, only to see things from a different viewpoint as our perspective changes. It’s all very cleverly constructed. In Revenge, we meet characters who seem isolated or detached from society in some way; many live alone, their lives infused with sadness and loneliness. Ogawa has a real talent for exploring some of the disquieting parts of the human psyche, the acts of darkness that can lurk just beneath the surface of the everyday. An excellent collection of unsettling stories.

Nothing Holds Back the Night by Delphine de Vigan (tr. George Miller)

To be honest, highly autobiographical books aren’t my usual my cup of tea, but NHBtN is so good that it warrants inclusion here. Virtually impossible to summarise in a couple of sentences, this remarkable story focuses on a woman’s quest to gain a deeper understanding of her mother following the latter’s death by suicide. A genuinely absorbing and compelling book, beautifully written in a sensitive style – de Vigan’s prose is simply luminous.

And finally, a special mention for a fairly recent read:

In this highly unusual, utterly compelling novel, we follow Simon Limbeau’s heart for twenty-four hours – from the young man’s death in a freak accident one morning, to the delicate discussions on organ donation with his parents, to the transfer of his heart to an anxious recipient in another city later that evening. De Kerangel explores the clinical, ethical and the emotional issues at play with great sensitivity. Superbly written in a fluid, lyrical style, this is a novel that will stay with you long after the final page has been turned. (A cliché, I know – but in this case, it’s actually very apt.)

This book has already been widely reviewed across the blogosphere, so I’m not planning to cover it in more detail here. Instead, I can point you towards a couple of thoughtful posts that I recall seeing – this one by Grant at 1streading and this one by Marina Sofia. It’s definitely worth considering.

Do let me know what you think of these books if you’ve read some of them already or if you’re thinking of reading one or two of them next month. Maybe you have plans of your own – if so, what do you have in mind? Or perhaps you have a favourite book by a woman in translation? Please feel free to mention it here. 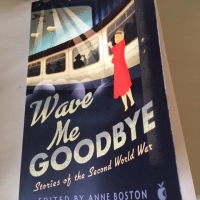