A few weeks ago, I posted a piece about Natalia Ginzburg’s Happiness, As Such, a novella about love, happiness and the messy business of family relationships in 20th-century Italy. Innocence – the sixth novel by the British writer Penelope Fitzgerald – taps into similar themes, set as it is in Florence in the mid-1950s. It’s a captivating book – exquisitely written, as one might expect from this most graceful of writers.

Central to the novel is Chiara, the eighteen-year-old daughter of Giancarlo, the head of the once-wealthy Ridolfi family. However, before we dive too far into Chiara’s story, Fitzgerald takes us back in time to the middle of the sixteenth century when all the Ridolfis were midgets as a consequence of a particular genetic condition. At the time, the family go to great lengths to protect their youngest daughter from the knowledge that she might be ‘different’ from other girls by surrounding her with other, similarly-sized individuals. They hire a companion for the girl – a dwarf named Gemma. But when Gemma experiences a sudden spurt of growth, the Ridolfi daughter pities her, viewing her size as a freakish abnormality. As a consequence, she devises a well-intentioned plan to ‘correct’ her companion’s size, one that results in grisly consequences for young Gemma herself…

The moral of this fable is concerned with the inadvertent consequences of our actions – the fact that sometimes, despite our best intentions, we actually end up hurting someone when we had intended to do good.

Moving forward to 1955, the Ridolfis are no longer midgets, the genetic condition having dissipated over the years; however, they do retain a degree of eccentricity, a quality that sometimes manifests itself as naivete, hence the nod to the opening parable.

18yo Chiara has fallen for Salvatore, a Neurologist who hails from a poor family in the south. At thirtyish, Salvatore is considerably older than Chiara, and also quite different in terms of social class and personality. While Salvatore is somewhat prickly and intemperate, Chiara is changeable and alert, demonstrating an intriguing mix of eagerness and diffidence. It’s a somewhat misguided match, something that Salvatore reflects on when he recalls their initial encounter at a concert.

Salvatore, who was not a temperate person, intensely regretted having gone to this particular concert. What irritated him as much as anything else was that his mother had repeatedly predicted that if he went north to practise in Milan or Florence he would be got hold of by some wealthy, fair-haired girl who would fasten on him and marry him before he knew what he was doing. Now, in point of fact this girl was badly dressed and not fair-haired, or anyway only in certain lights, for example in the artificial light of the auditorium and the rainy twilight outside would anyone have called her a blonde. His mind chased itself in a manner utterly forbidden to it, round thoughts as arid as a cinder track. (p. 45)

As the novel unfolds, we follow the couple’s courtship leading up to their marriage – an event that takes place at the vineyard belonging to Chiara’s cousin, Cesare. The relationship between the young lovers seems driven by a series of misalignments – vigorous quarrels ensue, many of which are predicated on false impressions and misjudgements. And yet, despite knowing very little about one another before tying the knot, Chiara and Salvatore clearly love one another – even if they harbour rather different understandings of what constitutes love and happiness.

When Salvatore’s temper rose Chiara became not frightened but reckless, as when driving through the city’s traffic. They knew each other, to be honest, so little, and had so few memories in common (the concert, the limonaia, the wedding) that they had to use them both for attack and defence. They loved each other to the point of pain and could hardly bear to separate each morning. (p. 253)

Alongside Chiara and Salvatore, there are some marvellous secondary characters – most notably, Barney, Chiara’s forthright schoolfriend who hails from England. When called upon by her friend, Barney travels to Florence, subsequently aiding and abetting Chiara in her relationship with Salvatore.

Innocence is not a plot-driven novel, and yet it is wonderfully absorbing, immersing the reader in what feels like a pitch-perfect evocation of 1950s Florence. Naturally Fitzgerald’s prose is exquisite, conveying a strong sense of the Italian culture in the first half of the 20th century, including the differences between the north and the south. In particular, the novel is alive with the sights and sounds of the city, qualities that make it such a pleasure to read.

The wash of tourists and visitors was beginning to recede, leaving behind it the rich fertilizing silt of currency. The shops and small businesses which had faintheartedly shut in the August heat now reopened, those which had stayed open closed and the owners left for the country. Dense piles of hazel-nuts, with their leaves, appeared in the Central Market, and large mushrooms covering the counter with their wrinkled yellow dewlaps, just as earlier that morning they had covered the tree-trunks. Festoons of satchels and fountain pens hung in UPIMs windows. At the last possible moment, the names of the books to be studied in the coming academic year were given out, and the parents went humbly to queue in the scholastic bookshops. These could be considered as beginnings of a kind… (p. 93)

Regular readers of Fitzgerald will recognise many of her signature features. Two vivid, deeply-flawed characters that feel credible and believable; an innate understanding of the foibles of human nature; the beautiful descriptive passages, rich in finely-judged detail; and an air of strangeness or eccentricity that adds a touch of mystery. There’s a wonderful playfulness here too, a seam of dry wit running through the novel, adding humour to the blend of beauty and intelligence. Like the masterful The Beginning of Spring (which I read a few years ago), Innocence feels at once both straightforward and elusive, blending the directness of a love story with the slipperiness of a mystery or allegory. Another captivating novel from this highly accomplished writer.

Innocence is published by Fourth Estate, personal copy. Should you wish to buy a copy of this book, you can do so via this link to Bookshop.org (see the disclosure on the home page of my website).

29 thoughts on “Innocence by Penelope Fitzgerald” 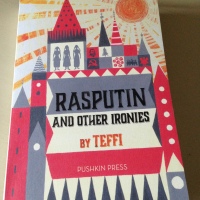