Like many other bloggers and readers, I first discovered Mary Hocking through Ali’s sterling efforts in championing her work over the past couple of years. While she seems very much her own writer, Hocking shares something in common with some of her forerunners and contemporaries – fellow British authors such as Barbara Pym and Elizabeth Taylor (possibly Beryl Bainbridge too, although I’m still relatively new to her work). In The Very Dead of Winter, she demonstrates a keen eye for social situations, especially those which highlight the tensions and mismatches that often emerge in family life. There is so much black humour in this novel too, but I’ll come back to that point a little later in my review.

As the novel opens, Florence and her grown-up daughter, Anita, are driving to a fairly isolated country cottage where they will be joining the rest of their family to spend Christmas in the snow. The cottage has been in the family for several years and is now owned by Sophia, Florence’s sister – the two sisters have rarely spoken to one another in the last thirty years, a point that becomes quite significant as their story unfolds. Also present at the cottage are Florence’s husband, Konrad, and the couple’s son, Nicholas. Konrad has been ill for some time, and it is clear from the start of the novel that he has only a few days left to live.

Florence and Anita are both rather self-centred; they attack one another at every opportunity and give very little thought to Konrad as he lies in bed upstairs. Florence, a domineering and manipulative woman at the best of times, seems unable to face up to the fact that her husband is dying. All her life she has occupied a central position in the family – first as a daughter and then as a wife and mother. Now she is fearful of a future on the margins, the lonely existence of a widow cut adrift from the activity of life. Sophia, on the other hand, is very different to Florence; a more insightful and sensitive woman than her sister, Sophia is much more attuned to Konrad’s needs, tending to him as passes through the final phase of his life. As the story moves forward, old grudges, resentments and family secrets come tumbling out of the closet, all of which add to the tension within the cottage.

As she looked at her sister, Florence was aware of anger always simmering inside her, an anger which sometimes boiled up unaccountably. Ever since she could remember, Sophia had looked as if she had started late for an appointment the purpose of which she had already forgotten. It astonished Florence that despite this she had never actually come to grief. […]

And yet, they were not unalike. There were times, brief flashes rather than occasions, when Florence was aware that at some level they understood each other perfectly. This was not a comforting insight. (pg. 102)

In truth, Florence has shown very little interest in her husband’s life over the past thirty years. As a young boy, Konrad had arrived in England as a refugee from Germany, an experience that left him somewhat scarred for life. As an adult with a talent for languages, Konrad had joined the BBC World Service, but in spite of this achievement, he remained something of a disappointment to his wife. With an eye on the glamour of placements in exotic locations, Florence had hoped that her husband would join the Diplomatic Service, but alas this was not to be – as far as Florence was concerned, he had simply let the opportunity slip through his fingers. Moreover, Florence has paid very little attention to Konrad’s interest in painting over the course of their marriage, an activity he enjoyed during weekends away from the family and all the accompanying tensions at home.

The characters and set-up in The Very Dead of Winter provide Hocking with a plenty of opportunities for a macabre style of comedy. There are several acerbic exchanges between Florence and her daughter, Anita, a Child Psychologist who shows very little in the way of empathy or sympathy for other people, especially children. Anita also comes to the fore when her brother shows an interest in Frances, a young neighbour of Sophia’s whom the two siblings visit during their stay. Nicholas is a geologist, forever thinking of his next expedition to a faraway land. By nature he is something of a loner, wary of getting entangled with other people, both their lives in general and their emotions.

‘Cocoa will do nicely,’ Nicholas said.

Anita looked at him pityingly. What did he think he was going to get out of this – the thrill of entering a forbidden temple? As Frances heated  milk on the stove, Anita studied her, making mental jottings – unusually composed for her age: although she is nervous she doesn’t allow herself to be hustled; emotionally reserved, but she can still look at Nicholas as if she is making a votive offering of this bloody cocoa; sexually unfulfilled, neither child nor woman. I wouldn’t want to deal with her and Nicholas certainly shouldn’t be allowed to. (pg. 27)

The novel comes complete will a raft of darkly comic scenes in which members of this dysfunctional family rub up against one another in this time of heightened emotions.

Alongside the humour, there are quieter moments too, insightful reflections on the nature of life and the challenges of adapting to change and loss especially as one grows older. In the passage below, Sophia’s neighbour, Thomas, contemplates his own situation. Florence has taken rather a shine to this gentle widower, viewing him as a potential partner once Konrad has passed away. For his part, Thomas is still mourning the loss of his own wife and son, the latter from a tragic act that has left a deep mark. The aforementioned Frances lives with Thomas – a relative by marriage, she takes care of Thomas and his young grandson, Andrew. Both Frances and Thomas are rather vulnerable in their individual ways. Nevertheless, Thomas knows the time will come when Frances must be encouraged to leave the nest, however painful that experience might turn out to be.

Thomas, washing up the coffee cups, reflected that not the least of the things she [Frances] had done for him was to save him from such as Florence. He was a proud man whose independence was important to him. The possibility that Frances might go – indeed should be encouraged to go whenever the time was right for her – leaving him to become the object of pity and calculation was more than distasteful, it was frightening. There was Andrew to consider. He had known several men who had made disastrous second marriages for the sake of their children. For a moment, as he dried the cups and trod in Jasper’s lunch bowl, he felt threatened as never before. (pgs. 107-108)

While I didn’t love this novel quite as much as the Taylors and Pyms I’ve read to date, I did enjoy it a great deal. There is plenty of wicked fun to be had in the company of these rather fractured characters, all of whom are painted with sufficient depth and insight to make them feel lifelike (even if some of them are a little grotesque). The novel has a dark quality, almost like a macabre fairy tale, and there are several references to this genre throughout the story. Hocking’s charming descriptions of the snowy landscapes add to the novel’s atmosphere. I couldn’t help but wonder if the images of gnarled and twisted tree trunks devastated by the hurricane of 1987 were a kind of metaphor for these rather damaged individuals and their broken lives.

My thanks to Ali for the copy of this novel which I won in a giveaway – you can read her review here. Caroline has also reviewed it here. This copy was issued by Virago, but Bello will be publishing a lovely new edition on 14th July (one of another 12 novels by Hocking). The new covers are rather beautiful.

The Christmas Card Crime and Other Stories – short story anthology 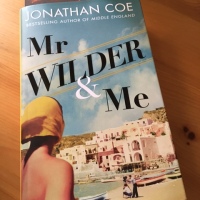