I first came across Tarjei Vesaas when a wine friend recommended him to me. He’s a Norwegian writer, probably best known for The Ice Place (1963) and The Birds (1957), both of which I can wholeheartedly recommend. The latter was namechecked by Karl Ove Knausgaard as one of the best Norwegian novels ever – but don’t let that put you off, it really is an excellent read. Spring Night (1954) is the third Vesaas I’ve read, and it’s easily my least favourite of the three. Nevertheless, it does contain some interesting elements, particularly in the set-up. 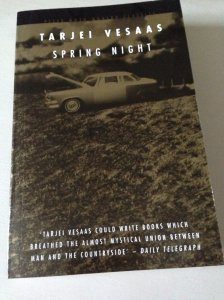 Fourteen-year-old Olaf and his older sister, Sissel, have been left home alone for the day and night while their parents travel to a nearby town to attend their uncle’s funeral. As the book opens, the afternoon is drawing to a close; it is a broiling hot day in late spring, and the atmosphere lies heavy with heat and humidity. It is clear from the start that Olaf is looking forward to the experience. The house though old and familiar feels different in some way, released from the presence and weight of his parents. There is a sense of freedom in his demeanour as he wanders among the nearby glade, exploring the lush and heady plants that grow there in wild abundance. Furthermore, he is fascinated by his sister, Sissel, and her boyfriend Tore, spying on them from a short distance as they engage in a lover’s tiff.

She straightened up. Olaf was ready to run, but she did not move, and he grew quiet again, spellbound by this game that he knew would some day also be his own game. (p.8)

Once the scene has been set, the story gets underway in earnest as the evening descends and preparations for supper begin. Olaf and Sissel are alone in the house, Tore having left some time earlier. All of a sudden there is a sharp knock at the door, urgent and persistent in tone. Olaf runs to the door and opens it, only to be confronted by the following situation.

It hit him hard, and nailed him fast at first – prepared as he was for something unpleasant by that threatening knocking. He saw a small group of people. Four of them. They had come up to the porch. Two men were supporting or carrying a young woman, and a young girl stumbled down the steps; it must have been she who had pounded so heavily and demandingly on the door. Now she was down with the others again and hid in back of them.

One of the men turned the burden over to the other alone, lurched over to the post on the porch and pounded at it, meaninglessly and in confusion. He was a small tousled man with excited eyes and arms he could not hold still. What sort of people were they? The man waved his arms wildly in front of Olaf and shouted:

A family of five has just descended upon the house in the hope of gaining some help and shelter following the breakdown of their car. The group is notionally headed by Hjalmar, a rather nervous, fidgety man who spends most of his time fluttering around and chattering incessantly. Then there is Hjalmer’s son, Karl, a brusque man whose primary concern is getting urgent medical assistance for his heavily pregnant wife, Grete, who appears to be in the early stages of labour. Accompanying them is Karl’s younger sister, Gudrun, a girl who bears a striking resemblance to an imaginary friend of Olaf’s – she even shares the same name as his make-believe confidante. Last but not least, the group is completed by Kristine – Hjalmer’s second wife – who at first appears to be unable to walk or talk, although later this turns out to be far from the case.

In essence, these deeply flawed, dysfunctional individuals bring all their psychological baggage and troubles into the house, inflicting their problems on Olaf and Sissel in the process. What follows is a series of oblique conversations undercut with family tensions, rash words and brooding silences. Here’s a short excerpt from a typical scene.

Olaf had to look at the two beside the radio again. They sat there as if they were playing some sort of mute game no one else knew. The man flitted around, chattered, picked things up and put them down again. The woman sat motionless in the chair. Olaf was on her side and said:

‘But I guess he wasn’t so awfully nice in the car.’

Gudrun looked at him quickly:

‘What do you know about that?’

As Olaf tries to make sense of it all, several questions are raised in his (and the reader’s) mind. Why is Kristine pretending to be mute when she can clearly talk? Why does she appeal to Olaf for help and protection against her husband? Why does Karl remain so agitated, even once a midwife arrives to support Grete? And what exactly went on in the car before it arrived at Olaf and Sissel’s house?

While Vesaas doesn’t provide any easy answers to these questions, he does create an interesting set-up in the house. There is the basis for a terrific noir here – the hot and sultry weather; the unsettling atmosphere of the setting; the two innocent teenagers home alone for the night; and the group of unhinged strangers who pitch up unannounced, brimming with unexplained tensions and secrets – but instead Vesaas takes the narrative in a different direction, one that I found somewhat unsatisfying in the end. I think this story is meant to a young boy’s loss of innocence as Olaf comes face to face with the complexities and confusions of the adult world. (He is certainly affected by the dramatic events of the night, and by each and every one of the visitors he encounters.) Nevertheless, I found it much less successful than several other books I’ve read which explore this timeless theme in different ways – novels like Alberto Moravia’s evocative Agostino; Stefan Zweig’s impressive Burning Secret; L. P. Hartley’s classic The Go-Between; and, a recent favourite, Olivia Manning’s wonderful School for Love. In the end, I found Spring Night rather oblique and ambiguous, too evasive for my tastes.

My other quibble relates to the character of Olaf. While it is suggested at the beginning of the novel that he is fourteen, later on it emerges that he is the same age as Gudrun who is thirteen. Either way, Olaf struck me as being much younger in his thought processes and actions, probably closer to eleven, although I’m willing to accept that he may have led a very sheltered life.

On a more positive note, the simplicity of Vesaas’ pared-back prose works well with the novel’s themes and point-of-view. The story is told mainly from Olaf’s perspective, so the style matches his childlike view of the world. Vesaas also does well in conveying the dark and brooding atmosphere of the surrounding landscape, especially in the opening chapters. There is a sense of something dangerous lurking in the nearby glade, an early sign of things to come. If only the bulk of the book had lived up to the promise of those early chapters, perhaps it would have resulted in a more satisfying reading experience for me.

The Stubborn Light of Things by Melissa Harrison

My Sister, the Serial Killer by Oyinkan Braithwaite (May book group) 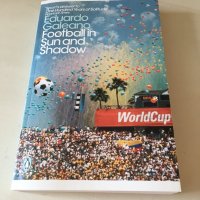