Patrick Hamilton’s quite brilliant novel, The Slaves of Solitude, takes us back to the winter of 1943. Having being bombed out of her room in Kensington a year earlier, Miss Roach, a spinster in her late thirties, is now residing in Thames Lockdon, a fictional town by the river just beyond Maidenhead. Much of the action takes place in the Rosamund Tea Rooms boarding house, where Miss Roach lives along with a handful of other residents. At first, the town had provided a welcome respite from the bombings in London, but now, after more than a year, life in Thames Lockdon seems closer to Hell. Having given up any hope of marriage some years ago, Miss Roach’s rather drab and dreary existence is mirrored by the dismal surroundings in which she finds herself:

Miss Roach turned on the switch by the door, and saw her room in the feeble light of the bulb which hung from the ceiling in the middle of the room and which was shaded by pink parchment. She saw the pink artificial-silk bedspread covering the light single bed built of stained oak – the pink bedspread which shone and slithered and fell off, the light bedstead which slid along the wooden floor if you bumped into it. She saw the red chequered cotton curtains (this side of the black-out material) which were hung on a brass rail and never quite met in the middle, or, if forced to meet in a moment of impatience, came flying away from the sides; she saw the stained-oak chest of drawers with its mirror held precariously at a suitable angle with a squashed match-box. (pg 7, Constable)

Hamilton has a wonderful knack for capturing the stifling and oppressive atmosphere in this provincial boarding house:

This system of separate tables, well meant as it may have been, added yet another hellish touch to the hellish melancholy prevailing. For, in the small space of the room, a word could not be uttered, a little cough could not be made, a hairpin could not be dropped at one table without being heard at all the others; and the general self-consciousness which this caused smote the room with a silence, a conversational torpor, and finally a complete apathy from which it could not stir itself.

Sometimes an attempt at a conversational jailbreak was made, and there would be some unnecessary loud and cheerful exchange between table and table: but this never had any hope of success. As the maid handed round the vegetables one voice dropped down after another; the prisoners were back in their cells more subdued than ever. (pgs. 12-13) 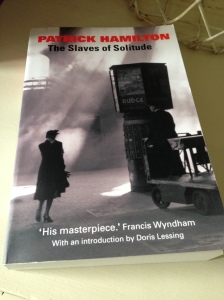 Miss Roach, a respectable yet somewhat meek woman, finds herself besieged not only by her drab surroundings, but also by the bullying behaviour of another of the Rosamund’s residents, the ghastly Mr Thwaites. Thwaites considers life in the Rosamund Tea Rooms as a ‘sort of compulsory indoor game, in which he perpetually held the bank and dealt the cards.’  With the Rosamund’s dining room as his main stage, Mr Thwaites proceeds to hold court, steering the conversation at mealtimes and passing judgements on the other residents, especially Miss Roach who has to share his table:

Mr Thwaites made a habit of being the first in the dining room for breakfast. No one had ever been known to beat him to it. Five, or even ten minutes before the time, he would be found sitting in his place at the table for four in the corner. It was as though he were fretful for the day to start, to be in his presidential position and to take charge of the day from the beginning. However early they appeared, those who entered after him, saying ‘Good morning, Mr. Thwaites’ and catching his eye, had a distant feeling of being on the mat for being late. Miss Roach did at any rate.

This morning, the Saturday following the one on which she had had drinks with Vicki Kugelmann at the Rising Sun, Miss Roach was in the room while the gong was still being hit, and took her place at the table with Mr Thwaites.

‘Good morning,’ said Mr. Thwaites. ‘You’re very early, aren’t you?’ But this was not intended as a compliment: it still meant that she was late. It implied merely that a chronically late Miss Roach had appeared relatively early upon the scene.

Hamilton’s characters are pin-sharp, and there are some wonderful darkly comic scenes in the Rosamund Tea Rooms – a black tragicomedy of manners might be one way to describe these sections. The dialogue is excellent too, and the novel contains some terrific extended passages which convey Thwaites’ coded conversations with the other boarders. It’s not just what Thwaites says; it’s more what he implies – the implication behind his blustering, coupled with his tone. These aspects seem equally (if not more) important than his actual words, as we can see in this exchange with Miss Roach:

‘Well,’ he said. ‘Your friends seem to be mightily distinguishing themselves as usual,’ and oh God, thought Miss Roach, not that again, not that again.

Miss Roach’s ‘friends’ – according to Mr. Thwaites – were the Russian people, and Mr. Thwaites did not like or approve of these people at all. (pg. 17)

Actually, the Russians were not Miss Roach’s ‘friends’. She had simply left some political publications hanging around in the Lounge, an activity that Mr. Thwaites considered ‘a diseased and obscurely Russian thing to do.’ As a consequence, Mr. Thwaites comes to associate Russia with Miss Roach and proceeds to torment her accordingly.

Into Miss Roach’s miserable life comes an American officer, Lieutenant Pike, who brings a glimmer of light and spontaneity to the proceedings. He takes Miss Roach for drinks at the local pub, evening walks in the park and at one stage even appears to hint at marriage. But the spontaneous Lieutenant, who also has a fondness for rather too much whisky, often disappears for several days at a time. While Miss Roach is attracted to Pike, she’s unsure as to where she stands with him.

The situation is further complicated by the arrival of a new lodger at the Rosamund, Vicki Kugelmann, a German woman whom Miss Roach has befriended in the town. At first Vicki charms the Rosamund’s residents, including Mr. Thwaites, whom Vicki quickly identifies as the dominant figure of the house. In fact, the previously rather chauvinistic Thwaites seem positively smitten by Vicki despite his initial suspicions at having to live alongside a German woman – if anything, he seems ‘more alert, lively and responsive’ when Vicki is around. Interestingly, this change in his demeanour is accompanied by an increasingly savage and sarcastic attitude towards Miss Roach, ‘as if he were angrily comparing her to Vicki.’

What’s more, it’s not only the Rosamund’s residents who fall under Vicki’s spell. Miss Roach’s American Lieutenant also considers Vicki cute, especially when she joins the couple on a raucous night out. As far as Lieutenant Pike and Vicki are concerned the evening’s a blast — but Miss Roach is embarrassed by her friends as they cavort around in a drunken manner, to the point where she cannot wait to get home. It’s not long before Vicki reveals another side to her personality as she adopts a rather spiteful and disdainful attitude towards Miss Roach:

‘No,’ said Vicki, moving towards the door. ‘You are not sporty, Miss Prim.’ She reached the door and opened it, ‘You must learn to be sporty, my friend. You are the English Miss. No?…Good night.’(pg. 169)

Alongside the main narrative, Hamilton also does a terrific job in capturing the ‘endless snubbing and nagging’ nature of war and its effects on provincial towns such as Lockdon. Billboard signs lecture inhabitants at every opportunity – citizens must not waste bread, use unnecessary fuel, undertake journeys unless absolutely necessary, etc. etc.  The war, which had started by making drastic demands of people, had now turned into a ‘petty pilferer’, stealthily stealing every last luxury and necessity. Even a simple sign that says ‘NO CIGARETTES. SORRY’ seems to sneer at Miss Roach with its rather sarcastic and nasty ‘sorry’.

I won’t say any more about the story for fear of spoiling it, but our sympathies are with Miss Roach as we will her to escape the confines of this ‘death-in-life’ existence. Suffice it to say that The Slaves of Solitude is a thoroughly satisfying novel – as devastating as it is darkly humorous, as accomplished as it is atmospheric. I can’t recommend it highly enough – one for my end-of year highlights, for sure.

Max at Pechorin’s Journal has posted an excellent review of this novel, which you can read via the link.

The Slaves of Solitude is published in the UK by Constable. Source: personal copy.

60 thoughts on “The Slaves of Solitude by Patrick Hamilton (review)”