La Femme de Gilles was Madeleine Bourdouxhe’s debut novel, first published in 1937 when the author was in her early thirties. It centres on a ménage à trois involving Gilles, his wife, Elisa, and her younger sister, Victorine, a timeless story of desire, selfless love and the pain these things can bring.  Bourdouxhe was a contemporary of Simone de Beauvoir, who praised the novella for its subtle portrayal of the differences between male and female sexuality. An English translation first appeared in 1992, but Daunt Books have given it a new lease of life with this beautiful edition published last year.

As the novella opens, we find Elisa ‘giddy with tenderness’ as she awaits Gilles’ arrival home from work at the local factory in the Belgian countryside. Deeply in love with her husband and expecting their third child, Elisa wants little more than to care for her family. In doing so, she strives to maintain as comfortable a home as possible. The opening scenes paint an idyllic picture, full of the simple pleasures of life:

He is leaning out of the window again, his mind at once blank and spinning with small thoughts: Sunday tomorrow…the smell of the soup…the beauty of the flowers in the garden. Life is sweet. As he watches Elisa bathing his two little naked daughters in the setting sun, he feels at peace. (pg.9)

Sadly for Elisa, it doesn’t take long for this harmonious existence to fall apart. Shortly before the birth of her baby, she begins to experience a vague sense of unease. Gilles appears unsettled in some way. At first Elisa puts it down to her own condition – after all everything is a little strange when one is heavily pregnant. But one evening, as Gilles is about to go out with Victorine (Elisa’s attractive younger sister), Elisa is a gripped by an acute sense of anxiety. With her back turned on Giles and Victorine, she rummages through her bag for some money.

One by one she fixed her gaze on some of the objects around her, the things that made up her familiar world, then her eyes lit on her own hands as they closed the bag, and she saw they were trembling. Precisely at that moment Elisa knew that behind her back there was another world, a world that was complicated, threatening, unknown. She felt it to be so and she was certain she was not mistaken; she was also certain that it was absolutely essential not to turn round suddenly and confront it. (pg. 18)

This quote is indicative of Elisa’s character. She realises that something is going on between Gilles and Victorine, but rather than addressing it directly, she chooses to remain silent and wait. Even though she is tormented by the thought of the affair, she follows Gilles when he goes out unexpectedly certain in the belief that he must be meeting Victorine. With each new discovery, Elisa hovers between a desperate fear of losing Gilles and a desire to cling to the hope that this phase will pass.

There is that long sequence of days when she anxiously awaits Gilles’ return, days when she is always on the lookout for whatever affection he still feels for her, however small, days when she discovers that he hasn’t been seen at the place where he told her he was going. And there are the nights, indistinguishable from each other, when Gilles is asleep but her suffering keeps her wide awake. She moves her hands towards him, runs them over his skin, leans close to his face very quietly, so as not to wake him: she sniffs out unfamiliar smells on him like a ferreting cat. (pg. 59-60)

At times, Elisa wonders if she should speak frankly to Gilles or to Victorine, to intervene in some way, but she is afraid of losing her husband. Even though the marriage is hanging by a thread, Gilles still comes home to Elisa. ‘As long as he is there, he’s still hers.’

Unable to talk to her sister or to confide in her mother, Elisa turns to the church for guidance. But in place of the comfort and advice she so desperately seeks, she is told to face the trials that God has sent her way. When Gilles finally opens up and confesses, Elisa finds herself in the role of confidante advising her husband on his relationship with Victorine. It’s a strange situation, one that highlights Gilles’ complete inability to appreciate his wife’s anguish, never mind the notion that he might be the cause of it.

La Femme de Gilles can be easily read in two or three hours, but this story has the potential to linger in the mind for much longer. The style is minimalist but very emotive – Bourdouxhe holds the reader close to Elisa’s point of view giving us near-complete access to her inner thoughts and feelings. It’s a devastating portrait of a woman isolated in her pain and suffering, in her self-sacrificing love for her husband despite his avaricious desire for her sibling.

There were many ways this excellent novella could have ended, but Bourdouxhe has constructed a forceful conclusion – even though I didn’t see it coming, with the benefit of hindsight it feels painfully inevitable. Rather than saying anything else about it, I’ll finish with a quote on Victorine. In contrast to her honourable, respectable sister, Victorine is rather capricious – a flirtatious creature who retains her angelic demeanour throughout the whole affair. One could describe her as thoroughly amoral.

For Victorine is one of those creatures who have no consciousness of their actions: she parades her irresponsibility throughout her life. One day, simply because Gilles was there, perhaps because it was rather too hot, her flesh desired that man, and she took him. So what? Nothing more in it for Victorine, it stops there. Afterwards it’s a question of trying to make sense of things, sense of life, and life doesn’t touch Victorine, it will never mark her smile or her eyes, which will stay young, clear, innocent for a long time. Unconscious offenders are the most dangerous of criminals. (pgs. 67-68)

I selected this novella for Biblibio’s Women in Translation event running throughout August. If you’re looking for ideas for #WITMonth, here’s a link to my reviews of translated literature by women writers.

Roman Holiday by Caroline Young; Peace Like a River by Leif Enger (for October book group) 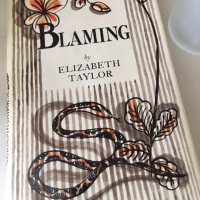